A white supremacist with a 30-year criminal record convicted murderer has been sentenced to death in Oregon. 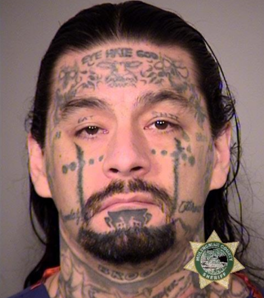 David Ray Bartol, 45, was convicted in mid-October in Salem, Ore., of the aggravated jailhouse murder of Gavin Siscel. Authorities said Bartol made a shank and used it to repeatedly stab Siscel in the eye, piercing his brain, while he was watching TV while being held at Marion County Jail.

Deputy District Attorney Matthew Kemmy told the jury, which deliberated for less than an hour before delivering the verdict, that the attack was “random and unprovoked,” that Bartol didn’t know the victim, but was angry at a former co-conspirator for talking to police, the Statesman Journal of Salem reported.

Evidence revealed that Bartol wrote that the jailhouse murder was a “free kill for my trophy room,” the newspaper reported.

The prosecution subpoenaed 160 witnesses and introduced 330 exhibits in making its case that Bartol deserved the death penalty.

“David Bartol is a frightening, dangerous person [and] that will not change,” the prosecutor told the jury.

Defense attorney Steven Gorham expressed dismay with the death penalty verdict and a prolonged trail that he said cost taxpayers more than $1 million.

When Bartol is formally sentenced on Tuesday, he will join 34 other inmates on Oregon’s death row. No one has been executed in Oregon since 1997, and there has been a moratorium on execution in the state since 2011.

At the time of the murder, Bartol, a former member of the Rude Krude Brood white supremacy gang, was in jail awaiting trial on a robbery charge after earlier being convicted in Portland of attempted murder and sentenced to 55 years in prison for that crime.

In that case, Bartol and a fellow gang member were convicted of attempted murder in two torture attacks on two fellow gang members in 2012 and 2013 in Portland. The white supremacy gang was involved in the distribution of methamphetamine and heroin, and used torture-assaults and intimidation to silence anyone they suspected of cooperating with police.

Bartol used an industrial belt sander to remove a white supremacy gang tattoo in one attack. In a second, he put a helmet on the victim’s head before firing a handgun at point-blank range and injecting him with heroin.

The brutal assaults and other crimes led to a massive investigation in Oregon, probing organized crime links between white supremacists and outlaw motorcycle gangs. Almost 60 suspects were arrested.