Floridian voters are spared listening to Augustus Invictus’ longwinded speeches and phony accent this election cycle, but the racist “alt-right” establishment now has a loose cannon on their hands.

Citing lack of funds, last week long shot Florida GOP Senate candidate Invictus announced his withdrawal from the race. Money, while perhaps the campaign’s most immediate problem, was just one among many issues in a candidacy defined by violent rhetoric and founded on ludicrous conspiracy. Invictus, an extremist who courts favor with white nationalists, is an admitted Holocaust denier and fantasizes about open civil war. Had his financial outlook been brighter, it’s anyone’s guess what Florida voters would have found most repellant.

According to Invictus’ statement to supporters, he decided to step down over concerns that he would fail to raise the $10,000 filing fee to get his name on the ballot. When he made his first unsuccessful run for the Senate as a Libertarian in the 2016 election, his campaign war chest was likewise impoverished. Last time around, he appealed to his small band of followers repeatedly for help covering the fee. According to Federal Election Commission records, when he finally paid it, the money was almost two months overdue.

His prospects are even bleaker in the 2018 cycle. He’s no longer eligible to practice law and apparently lacks any gainful employment, depending instead on paltry donations for his blog, the Revolutionary Conservative.

Despite cutting his losses early, Invictus encouraged supporters to look on the bright side. He may have been forced into a sudden departure from electoral politics, but he promised to redouble his efforts in what he called “revolutionary politics.”

“I’m going to focus on the hardcore message,” he said.

So, what exactly is that message? Invictus has always been cagey on details, taking refuge in trite, melodramatic oratory about great wars, armed resistance and the evils of liberalism, globalism and “Western decadence.” Although he tries to deflect charges of racism as unwarranted, his track record presents a litany of clumsy contradictions. And as far right factions began to split in 2017 over their public positions on race, Invictus repeatedly chose to align himself with openly white supremacist leaders of the "alt-right". In the past few months, he’s made that allegiance steadily more explicit.

In August, he appeared at the deadly Unite the Right rally in Charlottesville as a scheduled speaker, alongside white nationalists like Matt Heimbach, Mike Peinovich and Richard Spencer. Incidentally, that’s where he originally hoped to announce his 2018 Senate campaign — at the coming out party of America’s online racist fringe. 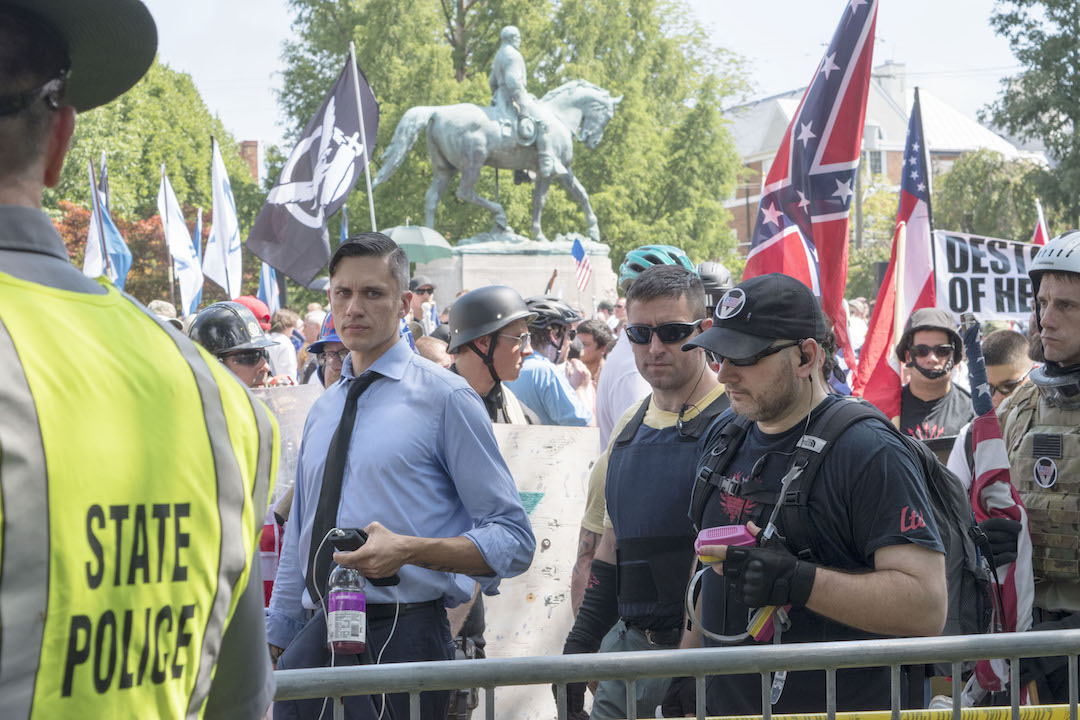 In October, Invictus solidified his ties to Spencer’s "alt-right" in-group when he joined the board of directors for the Foundation for the Marketplace of Ideas (FMI), an organization run by white supremacist lawyer Kyle Bristow.

He and Spencer have even more in common: Before their appearance at Charlottesville, the two teamed up to draft an "alt-right" manifesto. Invictus, who discussed the document at length in his video last week, described visiting Spencer’s apartment in Alexandria, Virginia, to collaborate.

“We had worked on this together, and then Richard kind of made it his own thing and published it,” he said. “I would say, however, I don’t find anything objectionable in it.”

“A man distinguishes himself by his deeds”

Though Invictus acknowledged Spencer for finalizing the details of the "alt-right" manifesto, there were a few excerpts for which he wanted the credit. The first was the section called “Family,” which reads, “The family — a man and woman in a loving relationship that produces offspring — is an essential, indispensable foundation for a healthy and functioning society.”

Invictus took extra care to emphasize the second, a sentence in the manifesto’s final paragraph: “A man distinguishes himself by his deeds.”

That’s a snappy way to state the obvious, and it’s also a useful principle when evaluating Invictus and his place in the radical right.

A series of police reports obtained by the Southern Poverty Law Center suggests that among his "alt-right" peers, he distinguishes himself by a striking lack of impulse control at best, and a manifest inclination for violence — particularly against women — at worst. 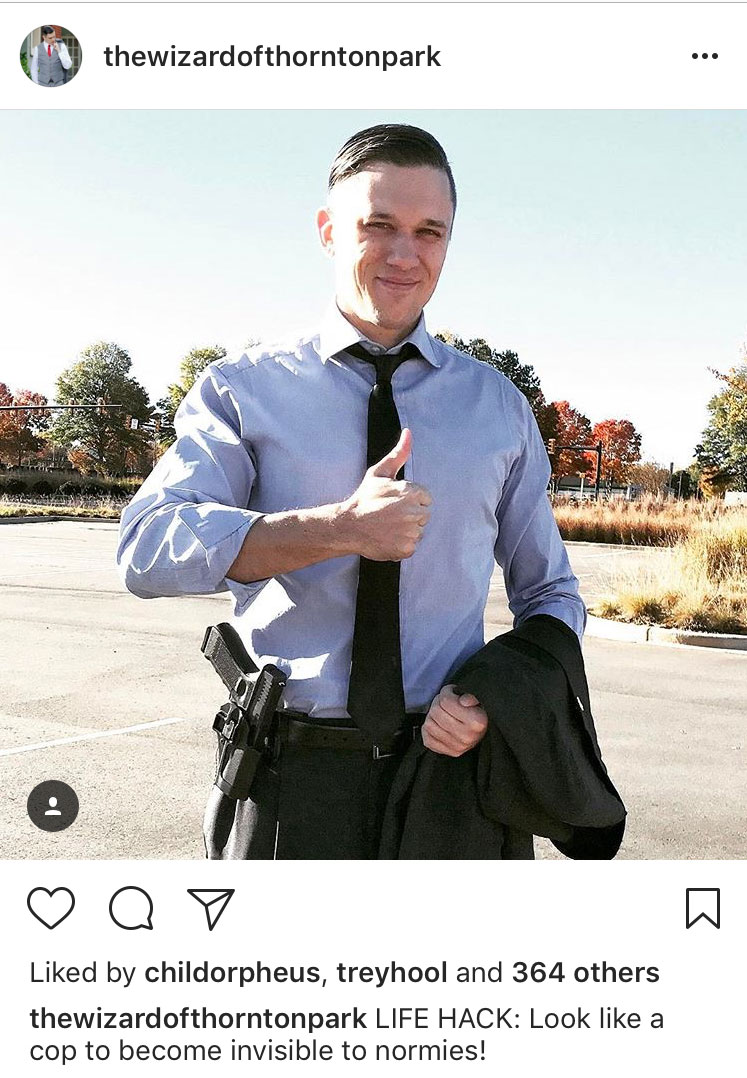 In 2014, two of Invictus’ male roommates went to the Orlando Police Department to accuse him of threats, intimidation and brandishing a firearm in the house. One of the men told officers of an incident in the early hours of the morning when Invictus confronted him in the living room with a loaded gun after mistaking him for an intruder. The man believed Invictus was under the influence of Seboxone at the time.

In Orlando in February 2016, a young woman called 911 and told responding officers that Invictus, an acquaintance, pulled a gun on her when she demanded he leave her apartment. Invictus denied the allegations, telling law enforcement that the young woman grabbed the gun first, though the weapon belonged to him. He was there with his then-girlfriend, who told police she heard, but did not see the altercation, and could not be certain who had the firearm first. The accuser wanted to press charges of aggravated assault, telling police Invictus was a threat both to her and his girlfriend. With conflicting statements and no further evidence, they declined to make an arrest.

In March of this year, another woman — a former girlfriend — reported him to police in Edgewood, Florida. Her allegations detailed harrowing, prolonged abuse, including imprisonment, sexual assault, beatings and death threats. Like prior accusations, the woman also alleged that Invictus threatened her at gunpoint. The young woman’s parents had earlier filed a report with a nearby police department, which stated they were concerned for her safety.

Invictus has repeatedly denied the allegations, which were obtained and posted publicly by a Libertarian blog shortly after the report was made. But the 2017 accuser is not the only woman to accuse him of intimate partner violence.

Twice in 2016, a different woman went to police alleging that Invictus had battered her. The first report was in March, after she and Invictus had broken up. She told Orlando police that he was stalking her, sending her unwanted emails and calling her at work.

The reporting officer writes, “The victim … stated via sworn statement the suspect had sent a friend a text message, and stated in that message that he was going to burn all of her possessions, and was going to shoot her on the spot.”

The report continues, “The victim further stated that the suspect has a history of violence, and has battered her numerous times over the past two years, however she did not report the violence.”

According to the officer’s account, the accuser provided law enforcement with the threatening text message, which was submitted to evidence.

She and Invictus apparently reconciled, because in August 2016, she went to police again. She alleged in a sworn written statement that during an argument the night before, he had beaten her, choked her and smothered her nose and mouth with his hand. The reporting officer took photographs, but noted that he did not see visible injuries to her face, neck or hand. The woman told police she wanted to press charges. According to the report, officers were unable to contact Invictus, and didn’t hear from him until he sent them an email denying the allegations. The woman later contacted police advising them that she left the state and didn’t plan to return.

Two sources, both close to Invictus and his accuser, suggested she fled Florida in fear shortly after the choking incident. Neither wishes to be named.

That kind of strongman worldview looks like more than just grandstanding when seen in light of the catalog of violent allegations Invictus has drawn over the years. His allies in the "alt-right" would do well to take notice.