On the anniversary of the Voting Rights Act of 1965, a group of about 50 volunteers organized by SPLC on Campus conducted a voter registration drive in Alabama’s Russell and Lee counties, 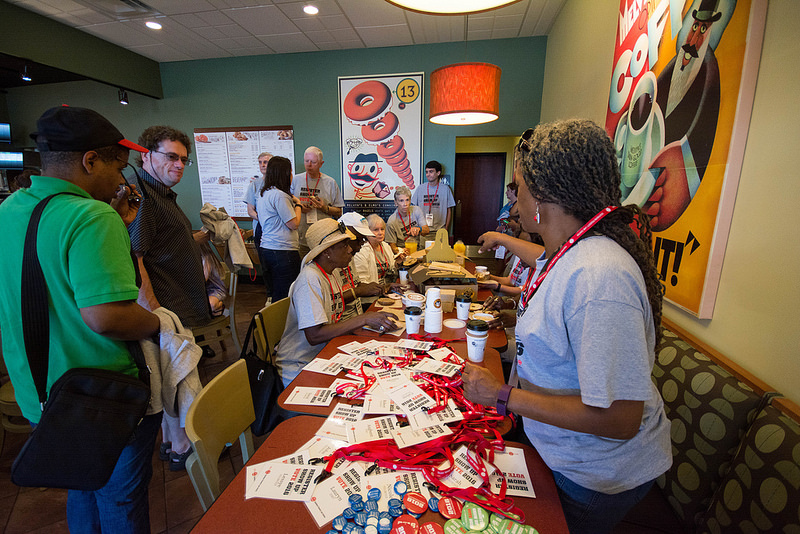 The group, which included students from Auburn University, the University of Alabama and Darton State College in Georgia, collected voter registration forms this past Saturday. They were joined by SPLC supporters and staff. The volunteers, who canvassed in front of supermarkets, restaurants and other retailers, also encouraged registered voters – as well as the newly registered – to get out to the polls in November. 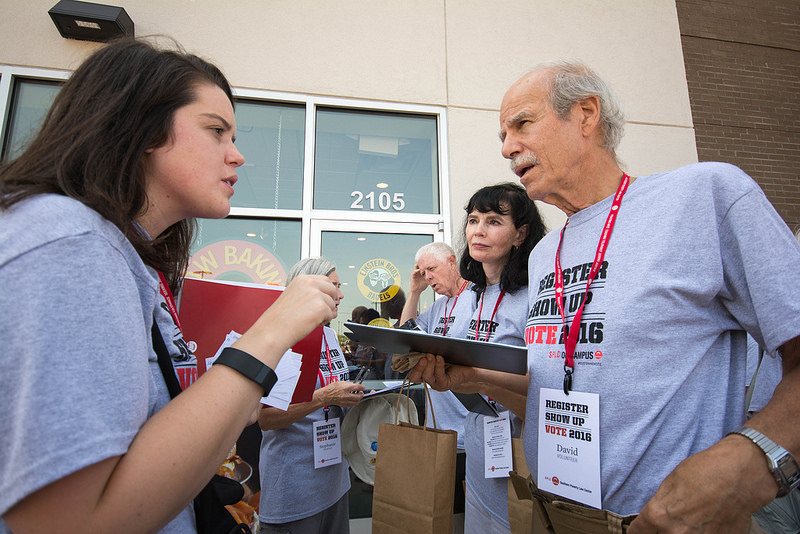 “It’s not enough to simply register, you’ve got to show up on Election Day,” said Emily Mumford, SPLC on Campus coordinator. “That’s the message we want young people to take away from this effort: Show up for elections at the state, federal and local level to make your voice heard.”

The SPLC’s college outreach program launched its voter participation initiative, “Register. Show up. Vote 2016” in January with a rally at the University of Alabama. Since January, SPLC on Campus chapters have organized their own registration events that have put high school seniors and their college classmates on the voting rolls.

Volunteersmet earlier in the day to strategize before heading out to register voters. Some traveled more than 100 miles for the effort commemorating the 51st anniversary of the Voting Rights Act, signed into law on Aug. 6, 1965.

The volunteers had their work cut out for them.

Only 71 percent of eligible voters in Russell County are registered – nearly 10 percentage points below the state average for registered voters. What’s more, fewer than half of its voting-age adults cast a ballot in 2012, putting the county dead last among all Alabama counties. Only 51 percent of Lee County’s voting-age population cast a ballot in 2012. 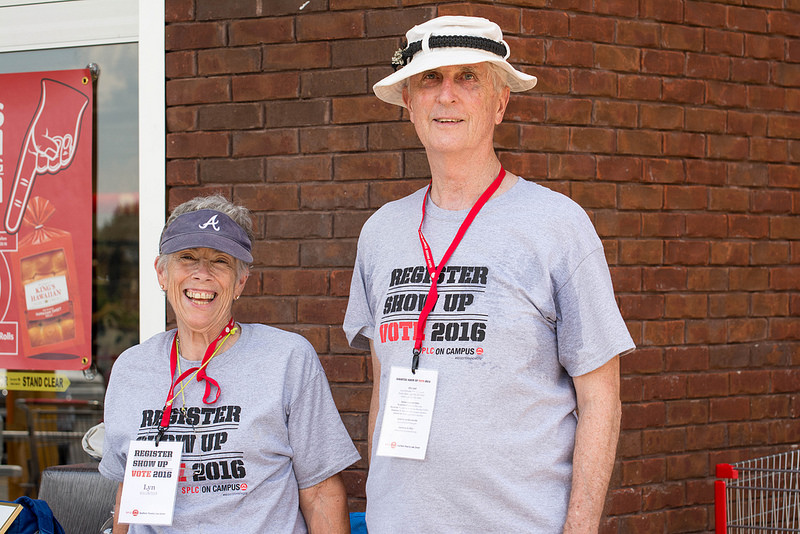 Lyn Heffernan and her husband, Ed, who are both active in other voter registration efforts in Alabama and northern Florida, praised SPLC on Campus for organizing the first-ever voter drive with SPLC supporters and staff.

“It’s extremely important [to vote] because people have fought for this right,” she said. “As fewer people vote, there are fewer people who control how our country is going. And that isn’t a democracy.”

The situation in Russell County is occurring at a time in the country when voting rights are at risk. In 2013, the U.S. Supreme Court invalidated a key provision of the Voting Rights Act. State and local officials in many jurisdictions (mostly in the Deep South) are now no longer required to seek federal permission to change voting laws. In 2014, voter turnout nationwide hit a 72-year low.

In the run-up to the 2016 election, 17 states passed new laws restricting ballot access, according to FiveThirtyEight.com, a news and statistics site. The states include Alabama, which passed a voter identification law.

Three Darton State College members of SPLC on Campus said that the event helped prepare them for a voter registration drive that they are planning this fall. It provided an opportunity to test different ways to engage people. 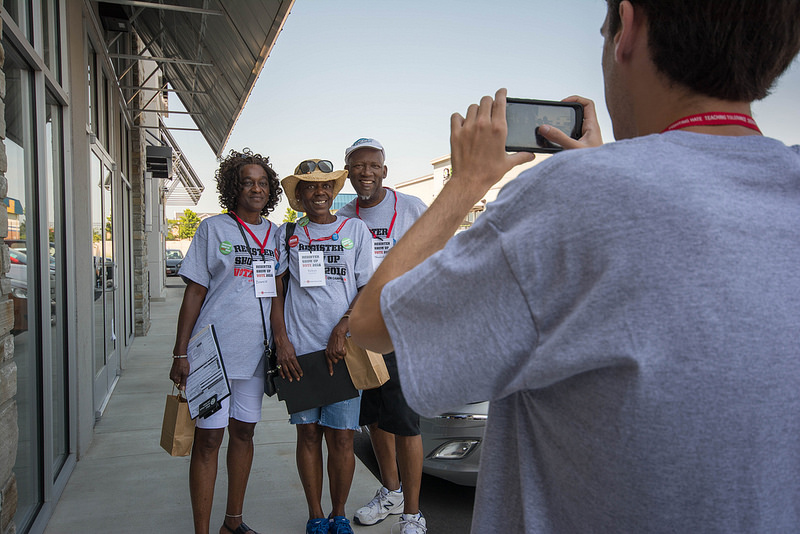 They also encountered Alabama’s felon disenfranchisement law. A number of people told the volunteers that they were barred from voting because of a past criminal conviction. An estimated 15 percent of African Americans are denied the right to vote in Alabama because they have been convicted of a crime, including nonviolent crimes such drug-related charges, according to reports by The New York Times and The Washington Post.

The SPLC is also encouraging registration and voting in other ways. SPLC on Campus has launched the “I’m Voting in 2016 Because” campaign, which encourages people to use social media to share photos of what drives them to vote.

The SPLC also produced the voting rights documentary, Selma: The Bridge to the Ballot, and hashosted a number of screenings across the country, including a recent screening in Minneapolis attended by more than 500 people. Civic groups and educators can host their own screenings by requesting a free copy of the film and its companion teaching guide here.

More than 43,000 copies of the Teaching Tolerance documentary, which is narrated by Academy Award-winning actress Octavia Spencer, have been distributed to educators and community groups nationwide. 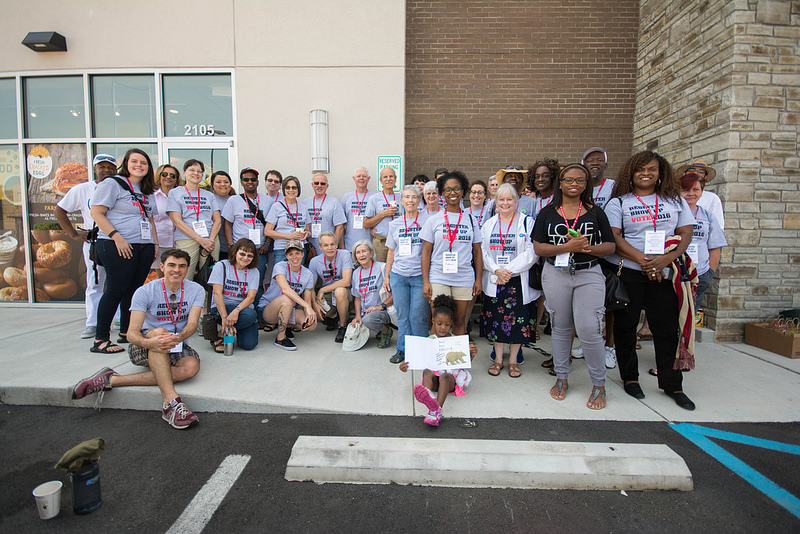