Janine Williams believed she’d finally be able to cast her ballot in this year’s election.

“I was sent a voter registration card, and I was the proudest woman in the world,” she said.

Three years ago, in 2017, Janine was released from Lowell Correctional Institution in Ocala, Florida. She’d just completed a five-year sentence for carjacking, a crime that was committed by her then-boyfriend. Nonetheless, Janine was convicted of the felony. She spent years after her release in several post-release programs like probation, parole and house arrest, accumulating debt from the costs of all the supervision, passed on to her in the form of monthly fees. 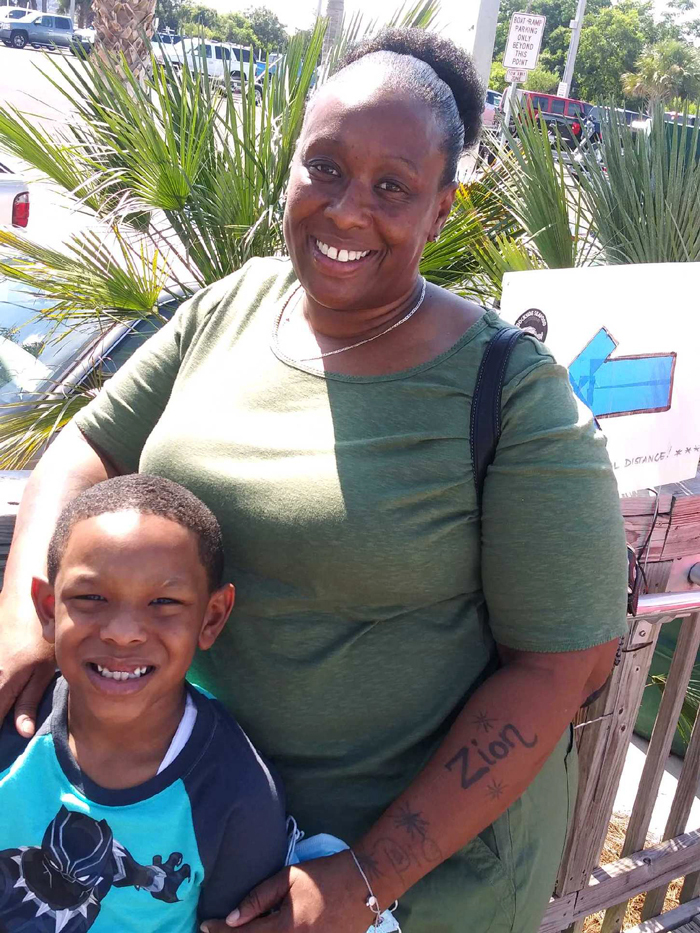 Janine Williams – here, with her son Zion – thought she’d regain her right to vote after Amendment 4 passed in Florida in 2018. The initiative restored voting rights to 1.4 million state residents, but lawmakers later undermined it by requiring that people convicted of felonies pay off their court costs and fines before casting a ballot. “It’s not fair,” Williams said. “I have a [voter registration] card that I cannot use. A voice that won’t be heard, all because I can’t afford it.” Photo courtesy of Janine Williams

When she finally finished probation, Janine thought she’d regain her right to vote after Amendment 4 was passed in 2018 – the initiative restored voting rights to 1.4 million Florida residents with previous felony convictions. She was ready for the opportunity to vote for candidates serious about criminal justice reform.

“After everything that happened to me, I thought maybe we can figure it out and do the research on these politicians before we elect them, and find out where their mindset is as far as actual recidivism. If you really want to change something, change the way people go in [prison] one way, come out another way ... you should have a fair shot at whatever you need, whatever you need to make sure that you don’t return.”

However, Gov. Ron DeSantis and Florida lawmakers undermined Amendment 4 by requiring that people convicted of felonies pay off their court costs and fines before casting a ballot. In May, a federal judge ruled that the modern-day poll tax was unconstitutional, but in September it was reinstated on appeal.

With thousands of dollars of court debt, Janine no longer has the chance to vote.

“It’s not fair. I have a [voter registration] card that I cannot use. A voice that won’t be heard, all because I can’t afford it.”

A tough past, a bright future

Janine had bouts with the criminal justice system before, but said it wasn’t until her 2013 felony conviction that she landed in prison. Before then, she’d suffered from a substance use disorder for years. She said it began with peer pressure in her teens, at first with alcohol and marijuana, but eventually escalated to crack cocaine and heroin, substances that can be extremely difficult to stop using without treatment.

“When your body says, ‘I need my drugs or I’m going to die,’ you don’t really choose. The first thought that you think is it’s very dangerous to be on drugs, especially if you’re on any that make you physically ill if you don’t have it.”

For Janine, the lifestyle that followed drug use led to financial hardships and difficulties with family. During this period, she would often be jailed for stealing groceries or other small items, and charged hundreds of dollars in fines afterwards.

But in 2013 when Janine found out she was pregnant, she decided she wanted to get serious about overcoming substance misuse and provide a better life for her child. She was approved to start a residential treatment program for pregnant women at River Region Human Services in Jacksonville, Florida, where she would have been housed for a year. However, she was arrested at the facility for the carjacking committed by her boyfriend that occurred the year prior.

Because of her history of minor offenses, the felony charge bore a heavy weight on Janine.

“They made me a habitual offender. My attorney said, ‘You confessed.’ I said, ‘I didn't confess to anything.’ She said, ‘You told them you were there, and that’s all you needed to say.’”

Janine gave birth to her son while she was in the county jail with the trial underway.

“It was horrible, having a baby there just not knowing my fate. I was wishing there was a way I could keep him inside me the whole time. But I couldn’t, of course. So that broke my heart. That alone, it changed me.”

A friend outside of prison raised Janine’s son while she served her sentence. While in custody, Janine participated in drug treatment, parenting and career-building programs, among others.

“I got a letter from the assistant warden that told me not to apply for any more programs – that I’ve already done too many, to give somebody else a chance, basically. Just do your time because you’ve done everything. But I was trying to take some other stuff. You know, I had a five-year sentence, but in my mind I had a five-year plan.”

When Janine was released in 2017, she moved in with the friend raising her child and got a job within three days at a local Goodwill, starting at $9 an hour. Because she had to work through restrictions from prior convictions that kept her from getting a driver’s license right away, she had no reliable transportation to get to work each day.

It took four hours of her day just to get to and from work.

As another hindrance, Janine was placed on several types of supervision, each with different costs.

“I was sending them $100 a month in the beginning because I had to, and it was in the thousands what they told me I owed. I said, how can this state give me money to eat, and then the same state says, ‘We want you to pay this money for probation’? The whole reason I’m even eligible for food stamps is because I owe all this money everywhere.”

Because Janine qualified for financial assistance, she was eventually able to get part of the probation fee waived, but they still were a burden to keep up with while paying other court costs and routine household bills.

Today, Janine is off probation and all other forms of supervision, but still owes thousands of dollars in court fees, a debt that is keeping her from the ballot box in November because of the most recent court decision on Amendment 4.

“They said don’t vote right now, because they’re going to try to jam you up later [by arresting you for voting]. If there’s a possibility I could get in any kind of trouble, I’m not doing it.”

What’s more, the COVID-19 pandemic has created additional financial burdens for Janine and her family, making settling the court debt an even more elusive goal. After a year or so working at Goodwill, Janine became a licensed home health aide, but once the pandemic hit, it was hard to find work. Now, she’s actively looking for remote jobs, but has found once again that a felony conviction is a daunting obstacle to securing work.

Still, Janine holds on to her ambition and finds light in the joy of her son, Zion, now 7.

“It means the kingdom of heaven. I gave him that name for just that reason, because he was truly my everything. From the moment I felt him move in my belly, I decided that change would come with him. He has a huge imagination; he’s already trying to write his own book. He is very active, and it’s almost like I was never away from him. That’s my strength right there.”

In January, Janine will celebrate eight years of sobriety. She recognizes that for women in the criminal justice system, addiction is not treated as a disease and treatment is not the priority.

“They just … punish you; you never really address the issues which have you sick.”

Janine’s own lived experience has helped fuel her aspirations of one day working in a treatment facility to help women who’ve also struggled with substance disorders. It would be her way of ensuring they receive the treatment they deserve.

“I feel that’s the biggest need there, to talk to women that have been there and done that, because nobody could tell me anything. You didn’t do drugs, then you can’t relate to me, there’s no way. They probably can receive it better from someone like me. And that’s a main part in staying clean, as well – to give back in some way.”

And without a voice at the ballot box, it would certainly be a powerful way for her to help shape her community for the better.