Earlier this week, the U.S. House overwhelmingly passed the COVID-19 Hate Crimes Act by a vote of 364-62. The Senate had approved the bill by a 94-1 vote last month.

The new law addresses the alarming spike in hate violence targeting Asian American communities amid the pandemic and will also help improve the response to hate crimes directed against other people of color, religious minorities, immigrants, people with disabilities and LGBTQ communities.

“Clearly, there is more work to do, but enactment of this legislation, by rare, huge bipartisan margins, is a major step forward,” Huang said. “We need solid data to develop sound public policy. Improved reporting requires better law enforcement training, concerted efforts to build trust within targeted communities and resources to promote accessible reporting systems – and that’s what this bill is designed to do. We are so grateful to the Congress and President Biden for enacting this law.”

The nation’s response to hate crime has long been hindered by a lack of comprehensive data needed to fully assess the problem – in part because local and state law enforcement agencies are not required to report hate crimes to the FBI, which compiles an annual report of such data. In many cases, officers are not properly trained to recognize and report hate crimes. And victims of hate violence often lack sufficient trust in law enforcement to report these crimes.

In 2019, according to the FBI’s most recent report, 86% of the 18,000 law enforcement agencies across the country either reported that they had zero hate crimes, or they did not report any data to the FBI at all. That year, the FBI reported there were 7,314 hate crime incidents. But surveys by the U.S. Department of Justice estimate that some 250,000 people each year are victimized by hate crime.  The SPLC and a broad range of civil rights and religious organizations have called for mandatory hate crime reporting.

Prior to passage, the COVID-19 Hate Crimes Act was amended to include the Khalid Jabara and Heather Heyer National Opposition to Hate, Assault, and Threats to Equality Act of 2019 (NO HATE Act). 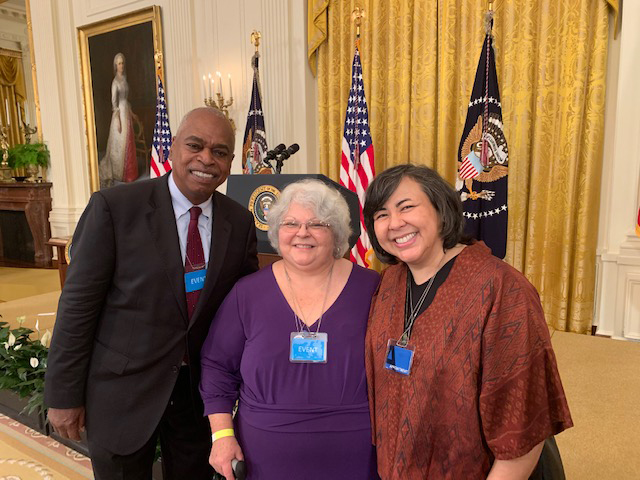 From left to right: Wade Henderson, interim president of The Leadership Conference on Civil and Human Rights; Susan Bro, mother of Heather Heyer, who was murdered by a neo-Nazi sympathizer at the “Unite the Right” rally in Charlottesville, Virginia; and SPLC President and CEO Margaret Huang.

Khalid Jabara was shot and killed in 2016 by a neighbor in Tulsa, Oklahoma, who had called Jabara and his family “dirty Arabs,” “dirty Lebanese” and “Mooslems.” Though the neighbor was convicted of first-degree murder and hate crime, the Tulsa Police Department never reported this murder as a hate crime to the FBI.

Exactly one year later, on Aug. 12, 2017, anti-racist protester Heather Heyer was murdered by a neo-Nazi sympathizer who drove his car into a group of counterprotesters during the infamous “Unite the Right” white supremacist rally in Charlottesville, Virginia. Although the killer pleaded guilty to violating the Matthew Shepard and James Byrd, Jr. Hate Crime Prevention Act of 2009 (Shepard-Byrd), his bias-motivated crime was never reported to the FBI as a hate crime.