Stacey O'Connell, the former Arizona state director for the Minuteman Civil Defense Corps (MCDC), has joined a Fountain Hills, Ariz., resident who donated $100,000 to the MCDC and now claims he was a victim of fraud. 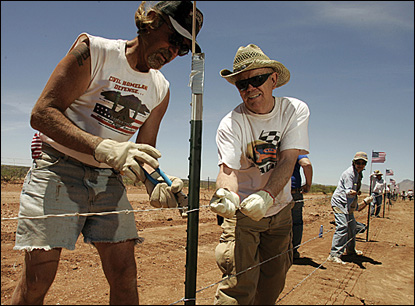 Although the Minuteman Civil Defense Corps has boasted of raising $600,000 to build a fortified border fence, it has only built a few miles of a barbed-wire cattle fence. Now, some donors are calling for a criminal investigation.

Stacey O'Connell, the former Arizona state director for the Minuteman Civil Defense Corps (MCDC), has joined a Fountain Hills, Ariz., resident who donated $100,000 to the MCDC and now claims he was a victim of fraud. The two men are calling for a criminal investigation of the troubled nativist group's fundraising practices.

"The government demands that these [non-profit] organizations provide tax documents based on truth and here [the MCDC] is clearly not truthful," O'Connell told the Sierra Vista Herald.

O'Connell was one of 14 MCDC state directors fired in May 2007 by MCDC founder Chris Simcox after they questioned his financial accountability and demanded that he make available the organization's financial records.

That purge took place the same month that retired homebuilder and Air Force veteran Jim Campbell filed a $1.2 million lawsuit against MCDC, alleging fraud and breach of contract. The previous spring, Campbell mortgaged his home to obtain $100,000 that he donated to MCDC after receiving fundraising materials from Simcox's organization. Simcox was soliciting money for the construction of a 10-mile-long, high-tech "Israeli-style" border fence on private ranch land in Texas.

One year after accepting that money, the MCDC had constructed only a few hundred yards of five-strand barbed wire cattle fence. Campbell says Simcox refused to give him back his money or account for what happened to it.

Campbell recently dropped his lawsuit because, he said, he didn't want to continue funding the litigation. Instead, he's seeking out other past MCDC fence project donors who feel they were defrauded and having them forward their personal accounts along with the "Israeli-style fence" fundraising materials they received to the U.S. Postal Inspection Service as formal mail fraud complaints.

Among the evidence Campbell personally submitted to federal authorities is a 2006 IRS Form 990-EZ for the Minuteman Foundation, Inc., the MCDC subsidiary formed to raise money for the fence project. It lists only $87,500 in donations for 2006, the same year Campbell alone donated $100,000.

MCDC officials claimed in fundraising materials dated August 2006 that they had raised $600,000 for the fence project.

"There is something wrong with that," says O'Connell, who is also calling for a mail fraud investigation. "There is smoke there, and we believe where there is smoke, there is fire."