Nearly 15 years after the genocide that killed at least 800,000 Rwandans, a government inquiry has uncovered alarming instances of schools teaching hate. 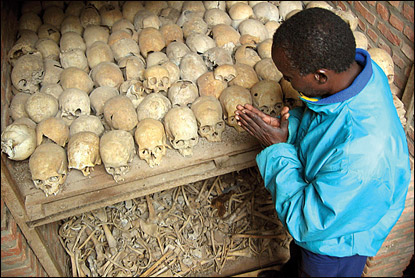 A survivor of the 1994 genocide in Rwanda prays over the remains of victims less fortunate than he.

Nearly 15 years after the genocide that killed at least 800,000 Rwandans, a government inquiry has uncovered alarming instances of schools teaching hate. The parliamentary investigation found that some schools were promoting what it termed "genocide ideology" — the denigration of a particular ethnic group. Among the examples:

The report is particularly disturbing given that Rwanda's state-sponsored genocide was the culmination of a decades-long campaign against Tutsis. Hundreds of thousands of Tutsis and moderate Hutus, the majority ethnic group, died over a period of 100 days in 1994.

In response to the report, the Rwandan Parliament is enacting a law aimed at curbing genocide ideology. In addition, dozens of high school teachers were suspended from their jobs for promoting hate and ethnic division.

The Belgians, who controlled Rwanda after World War I until 1962, fostered ethnic divisions by issuing identity cards to Rwandans based on whether they were Hutu or Tutsi. In the late 1950s, the Belgian military encouraged Hutus to topple the Tutsi monarchy, causing many Tutsis to seek refuge in nearby countries. In April 1994, the airplane carrying the Rwandan president was shot down over Kigali, triggering a massacre that would spread throughout the country. After three months, the Rwanda Patriotic Front (RPF) led by Paul Kagame — now president of Rwanda — secured the capital and stopped the mass killing.