The law enforcement careers of two white supremacists ended abruptly in separate cases last January when one was forced to resign and the other was sentenced to prison on drug charges.

Fruitland Park, Fla., police officer James Elkins, 28, quit the force during an internal affairs investigation into reports that Elkins was distributing Ku Klux Klan recruiting literature. Also, a local sheriff's office had received photos of Elkins dressed in Klan regalia, including one in which his uniform, badge and service revolver were visible beneath his unfastened white robe.

Elkins initially denied he was involved with the KKK. But after investigators linked him to a post office box that was used to send and receive Klan literature, Elkins admitted that he was the "district Kleagle," or local recruiter, for the National Aryan Knights of the Ku Klux Klan, a small Klan group based in Englewood, Fla., some 160 miles from Fruitland Park. 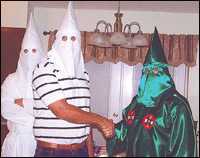 "It's an embarrassment to this department, it's disgusting and we do not tolerate this kind of conduct," Fruitland Park Police Chief Mark Isom told a local television reporter.

In that role, Dwyer had recruited racist skinheads, organized a neo-Nazi rally on Whidbey Island, and visited white supremacist Randy Weaver at his remote Idaho cabin just days before the infamous Ruby Ridge shootout and siege in August 1992. In April 1994, Aryan Nations founder Richard Butler presided over Dwyer's marriage ceremony, held beneath a burning swastika during an Aryan Youth Conference held at the Aryan Nations compound in Hayden Lake, Idaho.

By the time he moved to Prescott, Ariz., in 1999, however, Dwyer claimed he was no longer a neo-Nazi. He got the detention officer's job and was promoted to deputy in 2000. Whatever his ideology, though, his off-duty behavior proved less than exemplary. In September 2008, Dwyer, 41, pleaded guilty to providing alcohol, marijuana and cocaine to minors at homemade pornography viewing parties. He was sentenced last January to seven and a half years in prison, with no chance for parole.