When scientology comes up, what comes to mind for most folks is a bizarre belief system practiced by fabulously wealthy, fabulously famous movie actors and other white denizens of Hollywood. Think Tom Cruise and John Travolta.

The Nation of Islam, for most, conjures up a very different picture — stern-looking, bow-tied black men standing on street corners in tough neighborhoods, selling newspapers promoting the Nation’s white-bashing theology.

What could these two religions have in common?

As it turns out, more than most people ever imagined — and that’s true despite the persistent stories about the allegedly virulent anti-black racism of the late founder of Scientology, L. Ron Hubbard (pictured below). What’s more, it’s not just that both these highly unusual belief systems include elaborate accounts of spaceships.

For about a year now, Nation of Islam (NOI) leader Louis Farrakhan has been telling his followers to embrace the Church of Scientology (COS) in order to move closer to perfection in preparation for the end times. According to the NOI’s Final Call newspaper, nearly 700 NOI members have become Certified Hubbard Dianetics Auditors, and more will be trained in COS techniques “to prepare better servants and saviours of the people by helping to clear up their minds and lives.”

COS “auditors” are said to help people ascend to higher levels of consciousness by teaching them to “clear” troublesome thoughts and memories, ultimately achieving a state of perfect self-control.

Farrakhan’s new efforts coincide with his view of the imminence of the end times. Nearing 80, the NOI leader has recently ramped up his apocalyptic warnings, identifying natural disasters, the uprisings of the “Arab spring,” and U.S. attacks on Libyan leader Muammar Qaddafi, a long-time NOI ally, as evidence. This spring, he predicted that the world as we know it will soon be destroyed.

“Have you ever noticed why none of our organizations really reach what they’re supposed to reach?” Farrakhan asked his followers last Feb. 27 in a speech marking Saviour’s Day, the NOI’s most important annual event. “Let’s go to the root of it, because the sickness is not somewhere else. It’s right in our minds. We are Muslims but if Scientology will help us be better, then I want the technology of [Scientology] to help us be better Muslims.”

Chip Berlet, senior analyst at Political Research Associates and an expert on millenarianism, said Farrakhan is probably thinking he has limited time left to prepare his followers for their journey to the “Mother Wheel” and is desperate to see them ready before he dies. In NOI theology, the Mother Wheel is an artificial planet where the elect will be transported while smaller, divinely guided spaceships destroy everything left on Earth — typically described as including all whites, although NOI has occasionally suggested that a few “blue-eyed devils” might survive.

COS has its own UFO-friendly creation story, although it was a closely guarded secret for many years. Hubbard wrote that billions of beings were transported to Earth 75 million years ago by an alien overlord named Xenu who stacked them around volcanoes and set off hydrogen bombs in the volcanoes that scattered the traumatized “thetans” into the atmosphere. These bodiless beings now cluster around human beings, causing the problems that “auditing” is meant to clear.

It turns out that the relationship between the NOI and the COS — which does have a handful of black adherents — goes back further than most people realize. Farrakhan reportedly was introduced to Scientology in the late 1990s by the black actor Isaac Hayes, who was then the spokesman for the COS-backed World Literacy Crusade that was started by a black California minister. In 2006, Farrakhan was one of four black clerics honored at COS’ “Ebony Awakening” awards. 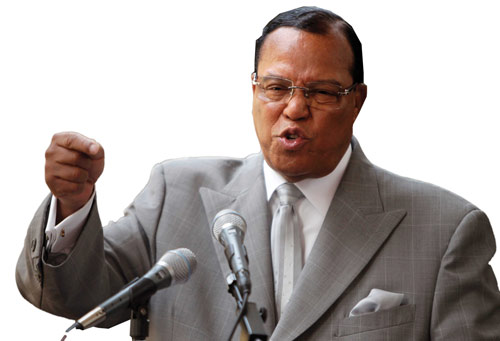 This isn’t the first bizarre alliance sought by the NOI. In the past, Farrakhan has participated in events with Klan and other white supremacist groups under the theory that both sides want racial separation — not to mention the anti-Semitism that NOI shares with most American white supremacists.

But unlike his meetings with white hate groups, Farrakhan’s close encounter with Scientology seems to have affected a core racial element of his thinking. “All white people should flock to L. Ron Hubbard,” the NOI leader said in unusually conciliatory remarks this February. “You can still be a Christian; you just won’t be a devil Christian. You’ll still be a Jew, but you won’t be a satanic Jew.”

Leah Nelson contributed to this story.