The Aryan Nations -- once the best-known white supremacy group in the country – has all but faded into racist history as 2015 draws to a close.

A mere 11 years after the death of Aryan Nations (AN) founder Richard G. Butler, there is no longer an official “Aryan Nations World Headquarters” or a web site jointly promoting his racist-brand of religion, Christian Identity, his Hitler-worship and the ideology of the Ku Klux Klan.

That’s not to say, of course, that white supremacy, bigotry, racism and neo-Nazi ideas have gone away. 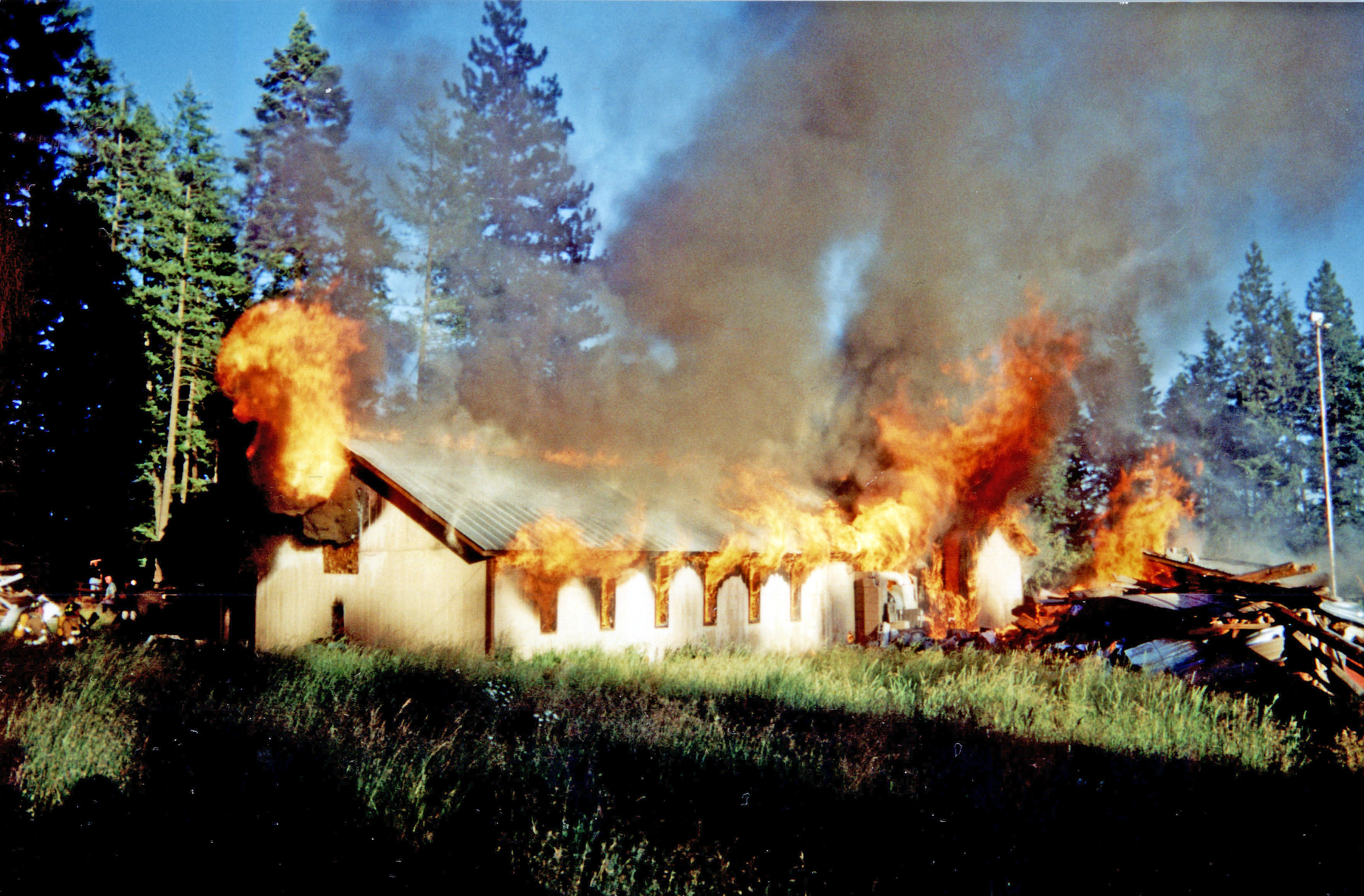 The former Aryan Nations church in North Idaho, forfeited in a bankruptcy following a $6.3 million judgment obtained by SPLC, was deliberately burned to the ground in 2001 during training for firefighters. (Exclusive to Hatewatch)

But rather than Butler’s Aryan church and clubhouse in the woods of North Idaho – deliberately burned to the ground after a devastating civil suit brought by the Southern Poverty Law Center (SPLC) and bankruptcy in 2000 -- white supremacists have regrouped largely through Internet connections and forums, occasional cross burnings and small gatherings of neo-Nazis.

A Grovespring, Mo., motorcycle club called the “Sadistic Souls” claims allegiance to the Aryan Nations, and it recently struck an alliance with the United Klans of America. But the Sadistic Souls bikers appear more interested in motorcycle runs, swilling beer and posing for photos with their middle fingers extended than the organized preaching of worldwide hate once espoused by Butler’s AN.

The last self-proclaimed leader of the Aryan Nations, Morris L. Gulett, who briefly was aligned with the Sadistic Souls and its leader, Dennis McGiffen, suddenly closed up shop last month at his “headquarters” in Converse, La.

It was a surprise for the racist movement. Only six months earlier, Gulett was boldly praising accused murderer Dylann Storm Roof, whose racist mind-set apparently was behind the brutal June shooting of nine people at Emanuel AME Church in Charleston, S.C.

Now suddenly, without capitulating, apologizing or retreating from his racist views, Gulett bluntly said he is retiring from the front lines.

The Aryan Nations “no longer exists with the veracity that it once had [and] therefore it deserves to be respectfully laid to rest,” Gulett said last month in his public announcement.

Within three days of that, Gulett took down the AN website where he regularly posted his racist sermons that frequently invoked Butler’s name, legacy and photos of the compound in Hayden Lake, Idaho.

Gulett didn’t offer a detailed explanation, but it may be that the man who spent prison time for assorted crimes simply couldn’t attract and keep many followers and their necessary financial support. He certainly didn’t admit failure.

Meanwhile, August Byron Kreis III, the other man who spent time over the last decade claiming to be the new Aryan Nations leader, with a somewhat polished website, was convicted this year of child rape and likely will spend the remainder of his life in prison.

Other would-be AN leaders, Paul Mullet, Gerald O’Brien, Drew Bostwick and Charles Juba, seem to have vanished from the racist forefront, and Butler understudies Neuman Britton and Ray Redfearin have died.

The flames of the Aryan Nations’ burning cross have quickly flickered out.

Still, on the national scene, and particularly in prisons, the AN name is revered and bandied about, particularly on racist websites and forums, including Stormfront. But the organization’s shingle – the Nazi swastika imposed over a Christian cross --  and a storefront no longer are easily found.

The down-hill slide actually began in 2004 with Butler’s death. That came after he and his Aryan Nations Church of Jesus Christ Christian filed for bankruptcy in North Idaho following a successful civil rights lawsuit, brought by the SPLC, resulting in a $6.3 million judgment following a jury trial in 2000.

SPLC Senior Fellow Mark Potok said the Aryan Nations was for decades “probably the best known, if not the most important, neo-Nazi group in America.”

“Now, 38 years after its founding, after it was brought to its knees by [the SPLC] suit, embarrassed by revelations about the pornographic habits and extreme violence of some of its principals, and gutted by the deaths of its most charismatic leaders, the group is essentially defunct,” Potok said.

“The group that produced some of the nation’s worst racial terrorists is finally dead,” Potok said.

And the man who once claimed to lead the Aryan Nations agrees with these sentiments.

“For all intents and purposes, the Aryan Nations Pastor Butler created in the mid-seventies is dead and gone,” Gulett said in his somewhat surprising Nov. 17 posting before leaving the racist stage, 23 years after being “ordained” a pastor of the Church of Jesus Christ Christian by Butler.

All that remains, Gulett said, “are a few good dedicated souls and a good many malcontents who wrongfully call themselves Aryan Nations, but will never be anything but degenerate prison gangsters and filthy unwashed wanna be bikers.”

That is an apparent reference to McGiffen and the Sadistic Souls. Gulett also had a name-calling, falling out earlier this year with Shaun Patrick Winkler, a former Butler protégé who failed in his 2012 attempt to build a new Aryan Nations compound in North Idaho. Winkler now lives in Mississippi and says he’s affiliated with the International Keystone Knights of the Ku Klux Klan.

“The Aryan Nations name has such a negative stigma attached to it these days because of these types of people that it has no real value to it any longer,” Gulett said.

Released from federal prison in 2010, Gulett said he has spent the past five years and “countless thousands of dollars” trying “to rebuild Aryan Nations to its former glory with the same Christian standards Pastor Butler always demanded of the membership. But in these the last days, it is futile.”

“Therefore today,” Gulett said in his November announcement, “I am announcing my retirement from Aryan Nations.”

“I will never lose respect for the noble and honorable organization that Pastor Butler created 40 years ago,” Gulett said, “but our Holy White Race has evidently lost the will to live.”

Gulett predicted an “ensuing race war is swiftly approaching [and] most of the white race will without a doubt perish.”

“Because of the degeneration of our people, the noble and honorable organization Aryan Nations no longer exists with the veracity that it once had. Therefore, it deserves to be respectfully laid to rest,” he said.

“No doubt some will continue to haul Aryan Nations through the mud by attaching its Christian standard to their filthy unwashed lives,” Gulett said.

The Sadistic Souls responded, disrespecting Gulett by calling him a Jewish “rabbi” and said he and Kreis didn’t possess the skills needed to succeed Butler. “Many have failed Pastor Butler, August Kreis III being the latest,” the Sadistic Souls said on the motorcycle club’s web site, noting Gulett’s departure.

“WOW!! Pastor Butler must be proud of you two,” the Sadistic Souls web site said.