Georgia’s Stone Mountain is marred by a massive carving that sanitizes the dangerous and hateful legacy of the Confederacy.

Stone Mountain is the world’s largest monument to white supremacy. The enormous landform – the centerpiece of a state park that draws more than 4 million visitors a year, some 15 miles northeast of Atlanta – is marred by a massive carving commemorating the hateful legacy of the Confederacy.

The carved surface depicts Confederate leaders Jefferson Davis, Robert E. Lee and Thomas “Stonewall” Jackson in a reverent light across three acres. The men sit on horseback, hats over their hearts, in a tableau that cannot be interpreted as anything other than a celebration of the Confederacy and the values – white supremacy and the enslavement of Black people – for which it stood.

Moreover, the history of the mountain and the Confederate memorial is intimately tied to hate groups like the Ku Klux Klan and the racist response to desegregation efforts in the 20th century. Work did not begin on the carving until 1923, long after the Civil War ended, and required three attempts and almost 50 years to complete. The final effort was launched in 1964 as a backlash to Brown v. Board of Education and the civil rights movement. The park’s official grand opening was pointedly celebrated on April 14, 1965 – 100 years to the day that President Abraham Lincoln was shot at Ford’s Theatre – but the carving was not completed until 1972.

There’s no question that Stone Mountain is a relic of an ugly past – a past that very much continues to haunt us to this day, as this year’s mass protests over the murders of Black people by police and vigilantes have made painfully clear. Across the country, statues and other pieces of Confederate iconography are gradually being removed from public display, a long overdue – and still incomplete – step forward after years of inaction.

Now, a growing number of people are calling for the Stone Mountain carving to be removed. Over the July 4 weekend, a large group of mostly Black protesters made headlines when they marched on the memorial bearing arms in a peaceful demonstration to demand just that.

At the Southern Poverty Law Center, we’ve long argued that Confederate symbols have no place in public spaces. Stone Mountain is no exception.

Stone Mountain’s history – both the site itself and the memorial that blights it – has for more than a century been entwined with the Ku Klux Klan.

On Thanksgiving night 1915, William J. Simmons led a group of 15 Klansmen to the summit of Stone Mountain, where they set up a flag-draped altar, opened a Bible and burned a 16-foot cross in a Klan initiation ceremony. The hate group had previously swept the South during Reconstruction but fizzled in the 1870s. Simmons’ Stone Mountain ceremony marked its second coming. The resurrected KKK would soar in popularity over the next few decades, primarily targeting Black people, but also people who are Jewish, Catholic or from other countries, among others.

Additionally, Klan money helped fund the Stone Mountain monument, and the first of its three head sculptors was a Klansman, as was the owner of the mountain, Samuel Venable. Venable, whose family bought the site in 1887 to run a quarry, granted the Klan rights to hold meetings there in perpetuity – and for decades it did. 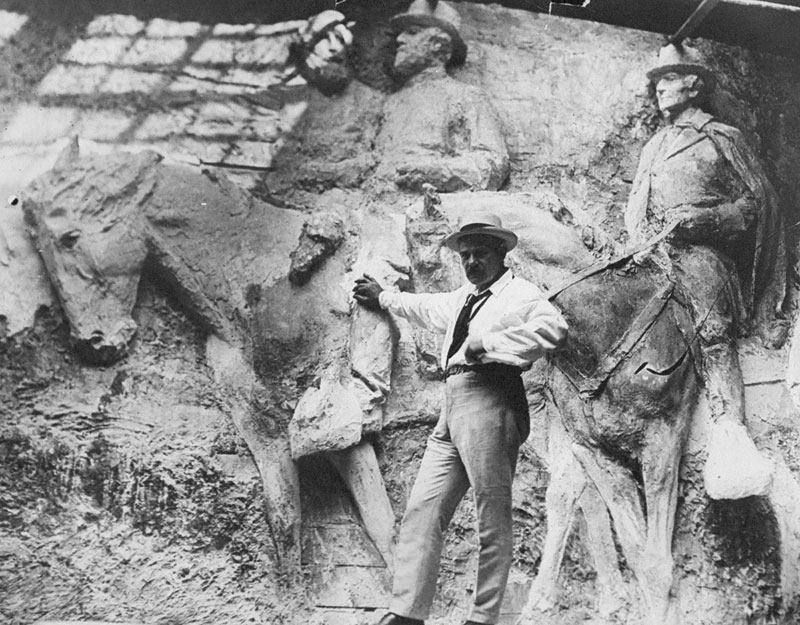 Helen Plane, a Civil War widow and charter member of the United Daughters of the Confederacy, spearheaded the first attempt to carve the Stone Mountain memorial. She, too, was a Klan sympathizer. After Gutzon Borglum was chosen as the monument’s sculptor in 1915, Plane wrote him with a design suggestion. “Why not represent a small group of them in their nightly uniform approaching in the distance?” she asked.

Due to funding challenges and World War I, the jackhammers, drills and explosives didn’t descend upon the mountain until 1923. Borglum had grandiose visions of carving an army of Confederates in addition to the three leaders, as many as 1,000 figures. But after a year’s work, all he’d completed was Lee’s head.

Project managers fired Borglum and later pressed charges when he destroyed his models. He fled the state and went on to carve Mount Rushmore in the Black Hills of South Dakota on sacred Lakota land.

One more attempt was made to complete the carving after Borglum’s departure, but by 1928, the project had stalled, and would sit mothballed for the next 36 years.

Then came the Supreme Court’s Brown v. Board of Education school desegregation decision and the rise of the civil rights movement. The racist backlash to the changing legal and cultural standards of the era was swift and widespread, especially in the Deep South. In 1958, under Georgia’s segregationist governor, Marvin Griffin, the state created the Stone Mountain Memorial Association and purchased the dome and surrounding land to create a memorial park. Carving resumed in July 1964 and finished eight years later.

While Georgia’s purchase of Stone Mountain voided the agreement that allowed the Klan to hold meetings there, that hasn’t stopped sympathizers and other white supremacists from making pilgrimages to their state-sponsored monument to hate. Notable rallies were organized at the site in 2015 and 2016.

Even as support for the removal of the Stone Mountain monument grows, a large hurdle remains: The monument is currently protected by Georgia law. As part of a 2001 compromise that retired a segregation-era state flag that prominently featured the Confederate battle flag, lawmakers adopted a statute that singles out the Stone Mountain carving for preservation:

“Any other provision of law notwithstanding, the memorial to the heroes of the Confederate States of America graven upon the face of Stone Mountain shall never be altered, removed, concealed, or obscured in any fashion and shall be preserved and protected for all time as a tribute to the bravery and heroism of the citizens of this state who suffered and died in their cause.”

The Georgia Legislature’s embrace of Stone Mountain only deepens the hurtful impact of the monument. Speaking to the SPLC in 2018, Richard Rose, president of the Atlanta NAACP, summarized the situation:

“If Joe Blow wants to put a statue of Robert E. Lee in his front yard or on his farm, I think that’s great. I mean, this is America; he ought to be able to do that. But the state of Georgia should not be doing that, the state of Alabama, the state of Virginia. Cities and counties should not be promoting white supremacy and racism.”

In recent years, legislation has been introduced that would strip Stone Mountain of its special protection, but none of those attempts have yet succeeded. That may change, as public opinion continues to shift on the removal of Confederate monuments.

In the meantime, creative solutions have been proposed to circumvent the state law. The law does not mandate maintenance of the Stone Mountain carving, for example, and if all cleaning work on the monument were to stop, natural vegetation would soon grow over and eventually obscure the relief.

Writing for The Guardian, Atlanta-based urban designer Ryan Gravel endorsed the “let nature take its course” approach: “We should allow growth to also overtake the sculpture’s many clefts and crinkles as they naturally collect organic material and allow moss and lichen to obscure its details. We should blast it with soil to encourage such growth and consider this new camouflage as a deliberate creative act, transforming the sculpture into a memorial to the end of the war – not to the traitors who led it.”