Sunflower County, deep in the Mississippi Delta, is typical of Southern agricultural regions that have weathered generations of oppression. Almost 35% of the population lives in poverty. The average per capita income is below $16,000. Three-quarters of the population is Black.

But as a public school teacher in semi-rural Leflore County, which is adjacent to Sunflower, Ki Harris saw potential in his students every day. What he couldn’t see, though, was a way to lift up their gifts to make their prospects better than those of their parents.

“I found myself very disappointed with public school education,” Harris said. “I was always impressed with the brilliance of my students, but also just as jarred by all of the structures, policies and curricula designed to stalemate that sort of brilliance.”

Two years later, in 2016, Harris joined up with the Sunflower County Freedom Project, an initiative designed to enhance educational opportunities and exposure for those students.

“It’s based on the Freedom Schools, the Freedom Summer of 1964,” Harris said, explaining the program. “It uses education as a tool for the liberation of communities.”

And, as it was during the early 1960s, not only is the battle for educational equity active, the rights that communities of color gained over the passing decades in every facet of life are under assault from forces on the right. Cloaked in the same racist ideology of the past and bolstered by four years of the Trump administration’s cozy game of footsie with white supremacists and hate groups, efforts to deny voting rights, economic equality and equal justice for Black citizens are on the move. 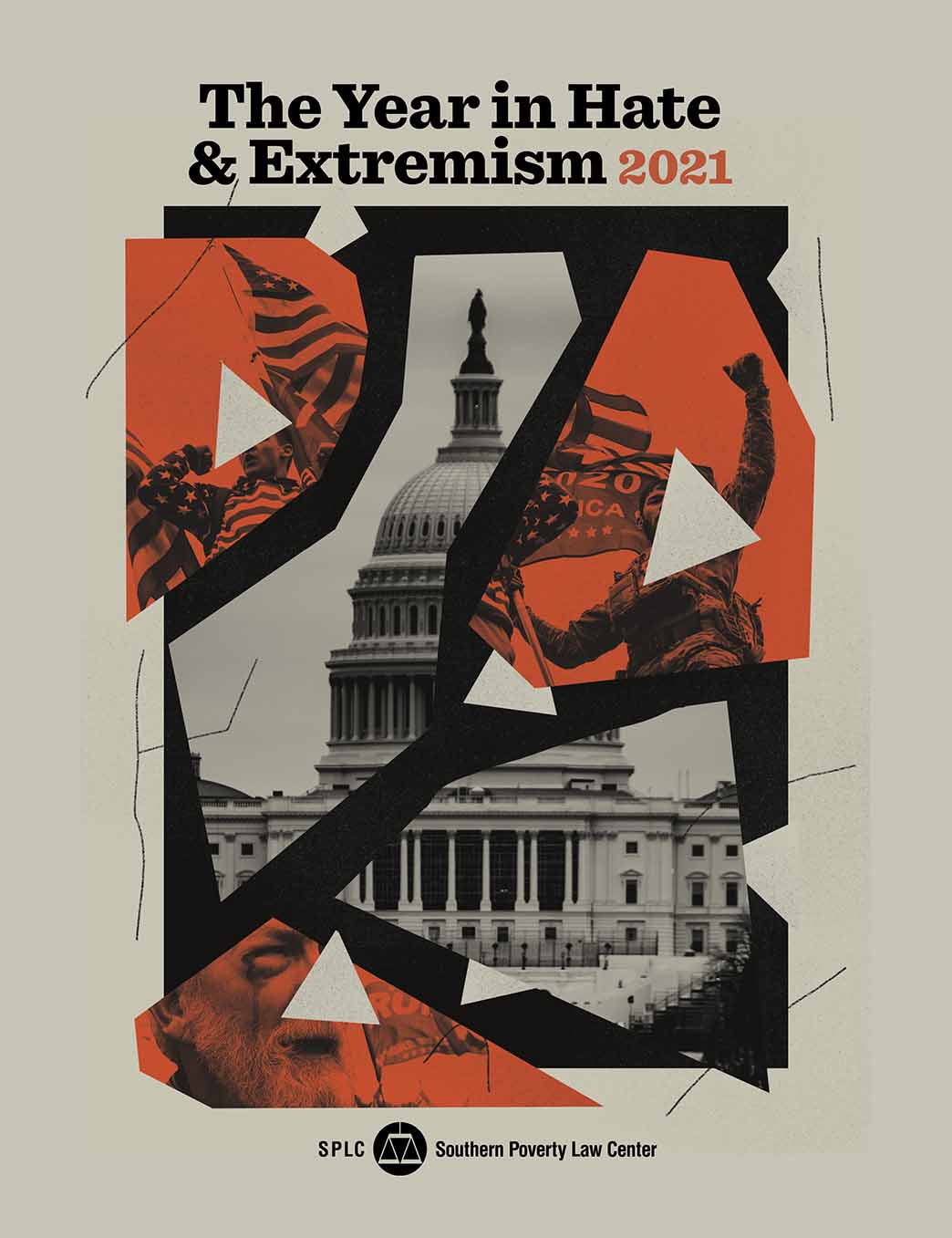 Click on the image above to view The Year in Hate & Extremism 2021 report.

It’s against that backdrop that the Southern Poverty Law Center released its flagship annual report, The Year in Hate & Extremism 2021, online this week. Although the report shows a decrease in the number of active hate and antigovernment extremist groups, it also warns that the decrease isn’t a sign of far-right extremists being vanquished or diminished. Instead, they are emboldened to the point that what used to be said in a hushed whisper or through a dog whistle is now emblazoned on T-shirts and blared through loudspeakers.

“The big change is the political leaders embracing it at the very top,” said Nate Schenkkan, deputy director of research for the SPLC’s Intelligence Project. “Yes, you did have senators and governors at that time in the ‘50s and ‘60s backing up those policies of resistance to desegregation, backing up attacks on the civil rights movement. Now, it’s been the president labeling Black Lives Matter protesters ‘terrorists’ and trying to deploy the forces of federal law enforcement — thankfully without success — trying to use them at times to investigate and to even shut those protests down.”

The SPLC has published its census of hate groups every year since 1990, adding far-right militias and other antigovernment organizations to the report several years later. Even though this year’s report shows a decrease in hate groups for the third straight year — from 1,021 in 2018 to 733 in 2021 — and a decline in antigovernment groups to 488 in 2021 from last year’s 566, the battle against hate is perhaps at its most active in the last 50 years, according to the report.

“After the efforts of the Trump administration to mainstream white nationalist ideology, we’ve seen a growing willingness on the part of extremists to openly embrace previously abhorrent views. Increasingly, these individuals are posting videos and using social media to call for the suppression of democracy, the banning of books, and even using violence to advance political agendas,” said Margaret Huang, president and CEO of the SPLC. “While the number of active organizations might be decreasing, the number of adherents to the ideology is not, and it’s important that we find ways to counter the spread of this extremism online and in other spaces.”

“It’s kind of interrupted right now by the change in administration,” he said. “But the direction of the far right continues in Trump’s absence. The momentum there is very much on that side.” 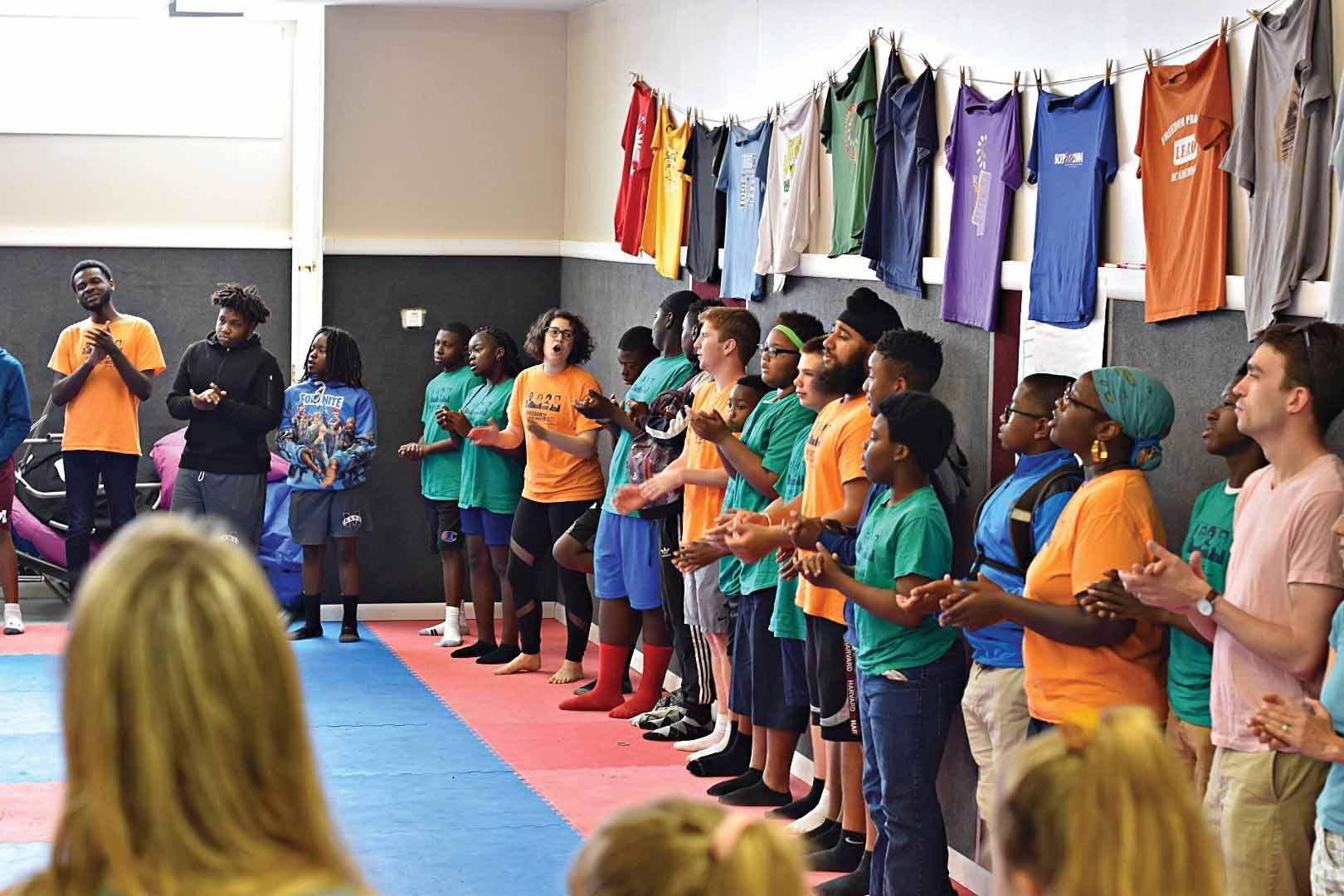 Fighting on all fronts

This year’s edition of The Year in Hate and Extremism report is a little different from its predecessors. That is because the landscape of hate and extremism has changed. Nowadays, much white supremacist and hate activity – including recruiting and radicalization – occurs online, so just having a headcount of physical, in-the-flesh groups gives an inexact picture of where those movements stand.

In addition to the numbers, the report also focuses on community resiliency in the face of extremism and the steps some people are taking against it in their communities.

Harris, for example, is featured for his work as the first executive director of the Freedom Project Network, which serves as an umbrella organization for all three Freedom Projects in Mississippi. In 2014, 15 years after the initial program opened in Sunflower County, the network’s second program opened in Meridian, Mississippi. A year later, another one began operating in Rosedale.

“We have this really powerful place-based, history-based student programming model, but we haven’t quite yet figured out how to scale it to maximize its potential as a collective,” Harris said. “We’re really shifting the narrative from these small little nonprofits to saying, ‘No, we’re actually a powerful statewide collective that’s trying to be a driver for progressive, liberatory education across this state and across this region.’ We’re not there yet, but that is the vision I am trying to sell people on.”

Education is a great inoculator against the growth of hate, said Susan Corke, director of the SPLC’s Intelligence Project.

“We feel the direction we need to go is not just exposing the hatred and the extremism,” Corke said. “We need to be putting forward real resources that can help make a difference. The big changes in the report this year are showing how you can make a difference.”

Communities in numerous locales over the last year have taken action, bringing the fight to the streets. In Philadelphia, residents confronted members of the Patriot Front when the openly white supremacist group attempted to conduct a “flash mob” march through their neighborhood on July 3. Community members gathered together and forced the marchers to retreat to the two Penske trucks they arrived in.

In New Orleans, one of the city’s largest Mardi Gras organizations — the Krewe of Nyx — all but vanished after its founder posted “All lives matter” on a social media site in the wake of George Floyd’s murder in 2020. The ensuing fracas caused a huge defection of members, dropping the roster from around 3,500 to fewer than 250.

Krewe member Mimi Owens Crouere, wife of local right-wing pundit Jeff Crouere, caused additional damage in the runup to this year’s parade on Feb. 23 when she posted on social media her support for leaving Robert E. Lee’s name and statue at a site near the city’s center. That post pushed locals to boycott the parade, leaving large portions of its route sparsely populated.

“In the past couple of years, it has become more evident,” said Lydia Bates, senior research analyst for the Intelligence Project, about increased racist language and comments. “Trump has left people feeling emboldened to be racist, misogynistic, xenophobic and anti-LGBTQ. Consequently though, I think it has galvanized more of a resilient effort in communities and organizational networks across the country.”

Steps like calling out hate and educating the next generation to stand up against extremism do not go unnoticed. Much of the extremist playbook being recycled today has been around for many years. But some white supremacist propaganda, like the “great replacement” theory – the notion that white people are being systematically replaced by people of color across the world – has become mainstreamed by pundits like Fox News’ Tucker Carlson. Such propaganda gains traction as progress toward equality becomes more apparent.

And with that traction comes violence, both physical and political. The white supremacist who in 2019 killed 51 people at two mosques in Christchurch, New Zealand, in fact, left a manifesto titled “The Great Replacement.”

“I’d say our democracy is really in danger,” Corke said. “The fact that these fringe ideas have become mainstream and are very connected to the Republican Party, we’re at a place of real danger. We still have the traditional hate and extremist groups. The numbers are down, but we still have them. We also have a large number of individuals who are getting radicalized online and are in the dark spaces. The fact that those people are having more access to mainstream politics, including and increasingly at the community level, we are facing a severe challenge to our democracy.”

Eras of progress in racial equity have typically been followed by a white supremacist backlash.

“That is and has always been a part of it,” Schenkkan said. “That backlash has been going on, if you want, since Reconstruction. But it has definitely been going on since the 1950s and desegregation – massive resistance, like an overt policy of resisting desegregation, government officials refusing to desegregate schools. Then the backlash to the civil rights movement, which included lots of terrorism, lots of violence. And that is definitely what we are seeing now in the mainstream – a willingness to continue those tactics in a 2022 form. It involves phones, it involves the internet, it involves devices that obviously weren’t around then, but that is just a matter of technology.”

The technology may not be the only driver for the growth of hate but it enables a small number of extremists, including terrorists like the Christchurch killer, to get their message out to the masses.

“One of the biggest dilemmas in this countering extremism space is that millions of people are exposed to extremist content, but only a handful, dozens, act on violence,” Schenkkan said. “This is the big problem with most of the intervention models. They can’t identify those people who will go towards violence.”

And the online megaphone exploited by extremists has enabled what were fringe movements to reach their kindred fringe dwellers no matter what physical distances may exist between them.

“It’s also enabled people to coordinate more easily,” Corke said. “They are able to mobilize and coordinate and fund raise. A lot of these individuals are making a living off of platforms on the internet. It’s happening on all sides, but a lot of our reporting is about how the right has really seized this ecosystem and grown around it.”

And, like that backlash, the hate that drives extremism has always been at our nation’s core, waiting to be fanned back into flame.

But the same tools, the same factors that can cause the flame of hatred to grow can be used to mobilize a fire brigade to quench it. Recently, at the Selma Bridge Crossing Jubilee to commemorate the 57th anniversary of Bloody Sunday, advocates and supporters from across the country gathered in Selma, Alabama, to demand action to protect voting rights and our democracy at all levels of government.

“When communities work together and lift up stories of hope and collective action to benefit all people, we find an energy and a momentum to reject hate and pursue a genuine democracy,” Huang said.

“People have a lot of power if they work together at the community level to push back against hate and extremism,” Corke said.