This April will be a month Ty Pinkins remembers for a long, long time.

The U.S. Army veteran retired following 21 years of service and returned to the Mississippi Delta after earning a law degree from Georgetown University. Last month, he learned he had passed the Mississippi State Bar exam. Last week, he was sworn into the Bar at the Mississippi Supreme Court.

But what will really stick in his mind is what happened on April 25, when he became a plaintiff in a lawsuit challenging the districts used to elect the justices of the Mississippi Supreme Court.

“This issue is significant to me because, clearly, the districts for the Supreme Court were drawn in a way so that communities of color, especially in the Delta, have no say,” Pinkins said. “The votes here do not carry the same weight as white votes across Mississippi.” 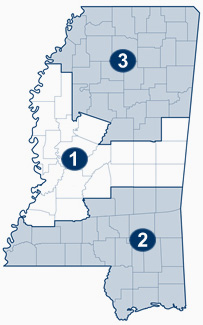 Mississippi has three Supreme Court voting districts that have been unchanged since 1987. Each district elects three justices to the nine-member court. (Credit: State of Mississippi Judiciary)

History bears out Pinkins’ assertion. The Mississippi Supreme Court is composed of three districts, arranged as rough horizontal bands spanning the state’s width, and three justices are elected from each district to serve on the nine-member body.

Mississippi’s population is almost 40% Black — a greater proportion than any other state. Yet in the 100 years that Mississippi has elected its Supreme Court by popular vote, only four Black justices have sat on it. There has never been more than one Black justice on the court at a time.

This underrepresentation persists even though Black voters make up a majority of the population in certain areas of the state, including the Mississippi Delta region. In fact, District 1, which includes part of the Mississippi Delta, could readily be redrawn to have a Black voting-age majority. As it stands, Black voting strength is submerged in three majority-white districts. This is a classic example of vote dilution, prohibited under Section 2 of the Voting Rights Act of 1965.

The lawsuit not only challenges the districts under Section 2 of the Voting Rights Act. It also claims the districts violate the 14th and 15th amendments of the U.S. Constitution.

“The districts have been maintained and reaffirmed despite knowledge and ample evidence that they dilute Black voting power,” said Liza Weisberg, a staff attorney with the SPLC’s Voting Rights Practice Group. “This type of intentional discrimination is unconstitutional.”

“We have an elected Supreme Court in Mississippi, but it is not representative of all our communities,” said state Senate Minority Leader Derrick Simmons, who is also a plaintiff in the lawsuit. “We have never had more than one of our nine justices Black in a state that is nearly 40% Black. That is way off.

At the heart of the issue, Simmons said, is the division of the Delta region.

“The way the districts are drawn divides the Mississippi Delta where Black Mississippians form a majority,” Simmons said. “For example, I represent a state Senate district that includes all or part of Washington County, Bolivar County and Coahoma County. All of my district is in the Delta, but my district overlaps with two different Supreme Court districts. So we can see that these lines are dividing a community of interest, and in particular a community of interest where there is a Black majority.”

Weisberg agreed that a simple fix would unite an established community of interest.

“The fix is really straightforward,” Weisberg said. “Modest shifts to the boundaries of District 1 would be sufficient to ensure that Black voters have an equal opportunity to elect their preferred candidates to the Mississippi Supreme Court.”

On April 25, Weisberg, along with co-counsel from the American Civil Liberties Union, the ACLU of Mississippi and the law firm Simpson Thacher and Bartlett, filed a complaint in U.S. District Court on behalf of several individual plaintiffs, including Simmons and Pinkins, business and civic leader Dyamone White, and educator Constance Olivia Slaughter Harvey-Burwell. Named as defendants in the lawsuit are the state Board of Election Commissioners, Gov. Tate Reeves, Attorney General Lynn Fitch and Secretary of State Michael Watson.

But the move to make changes started way before a lawsuit was ever envisioned. 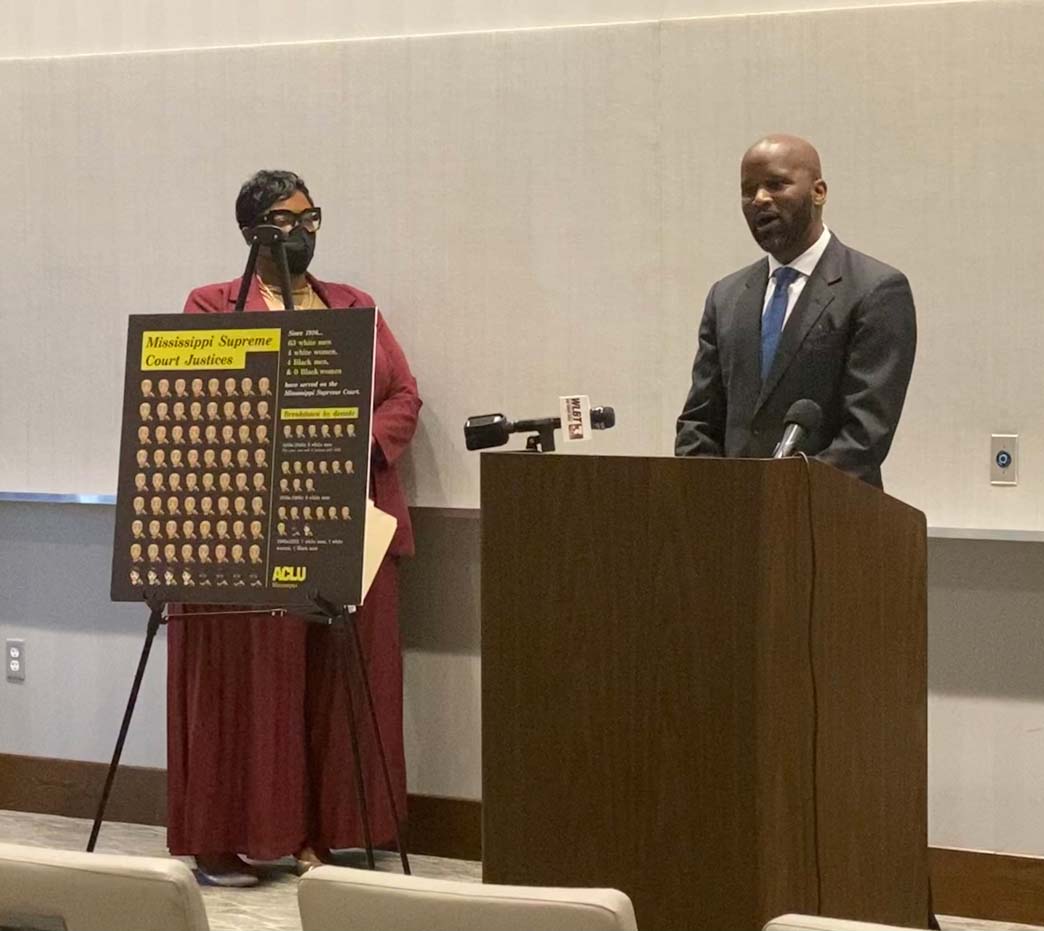 Ty Pinkins, right, a plaintiff in a federal lawsuit filed by the Southern Poverty Law Center and other organizations and individuals against maps that diminish the voices of Black voters in Mississippi's three state Supreme Court districts, speaks about the lawsuit during a press conference on April 25, 2022, in Jackson, Mississippi. Waikinya Clanton, left, the SPLC’s state office director for Mississippi, also attended the press conference. (Credit: Liza Weisberg)

“I was born and raised in Sharkey County,” Pinkins said. “I was an Army officer for 21 years, but I made a point to maintain my residency in the Delta. I continued to vote absentee in Sharkey County. I voted in elections from at least four different continents, three times in Iraq.”

He became involved in the litigation after witnessing the redistricting process in Warren County.

Pinkins was incensed enough at the effort that he learned the software that demographers use to create voting maps and created his own, then brought them to a Warren County Board of Supervisors meeting. Board members were surprised but not receptive.

Simmons, who has served in the Mississippi Legislature for more than a decade, said the issue of fair representation for historically disadvantaged communities was at the forefront of his efforts even before he took office. He has over the years noted a common link between representation and the general welfare of the constituents in his district.

“I have used my time advocating for issues that predominantly impact poor and disadvantaged Mississippians,” Simmons said. “A lot of times, those issues that impact them, the root of those issues is a lack of fair representation.”

For Pinkins, however, the change he is seeking is not only about the greater good. It also symbolizes a step towards leveling the playing field in his new second career as an attorney.

“I am giddy over this,” he said. “It tells me there is a chance that if I chose to rise to the Supreme Court, there would be a path for me.”