Next month, from May 24 to May 26, the anti-LGBT hate group Family Research Council’s (FRC) national outreach to pastors, Watchmen on the Wall, will be hosting its annual briefing in Washington, D.C.

The event attracts hundreds of local and state organizations from around the country. One of these organizations is the South Dakota-based Family Heritage Alliance (FHA). Founded in 2010, FHA describes itself as, “a family and conservative values advocacy group focused on promoting and defending faith, family, and freedom.”

However FHA’s activities in South Dakota are much more than politically conservative advocacy.

“This ideology disguised as a religion”

For several years national groups representing anti-LGBT and anti-Muslim movements have been converging with key figures speaking at each other’s events and supporting each other’s causes. This convergence has also made its way to state-focused organizations like FHA, which in addition to its high-profile anti-LGBT activities, has more recently turned to spreading anti-Muslim hate.

A handful of entries are reprints or reposts of other material, such as an article by the “Patriot” extremist media outfit WorldNetDaily, which attacked South Dakota civil rights advocateTaneeza Islam by quoting Shahram Hadian, who runs the hate group, Truth in Love Project.

In January 2018, FHA reposted a summary of a 2016 talk by Amy Willson, a former FHA staffer. Her presentation on Muslim refugees expressed a mix of anti-Muslim and nativist hate, by decrying that Americans “are choosing refugees from cultures alien to the Western Judeo Christian ethic” and described Islam as an “ideology,” a common anti-Muslim trope.

Ed Randazzo, FHA’s director of political operations, expressed similar sentiments. In a public Facebook post on his personal profile, he voiced his support for Aynaz “Anni” Cyrus, an anti-Muslim figure, who travels the country spreading anti-Muslim hate at public speaking engagements. In his post, Randazzo characterized Islam as “this ideology described as a religion,” “an aberrant ideology already on our shores,” “evil,” and “an ideology that is antithetical to freedom and your well being.” 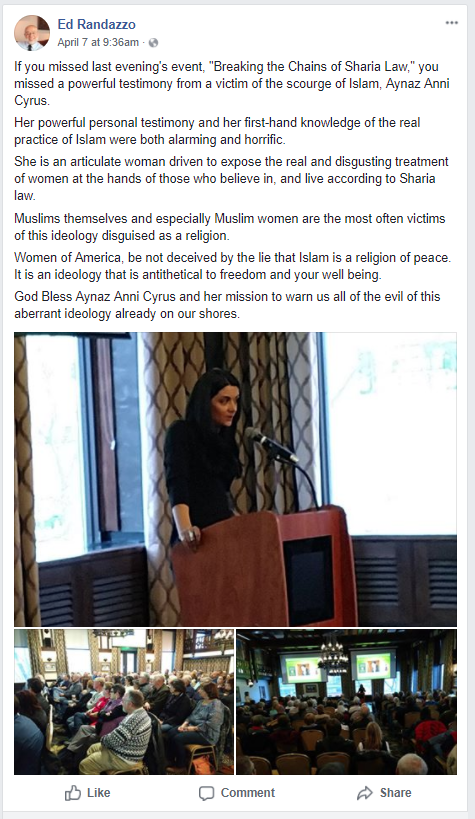 Randazzo has previously used his personal Facebook profile to cast Islam in existentially threatening terms while promoting anti-Muslim figures. On June 2, 2017, in a post promoting a talk by John Guandolo, President of Understanding the Threat (UTT), and his former business partner Chris Gaubatz, Randazzo proclaimed, “These gentlemen are the real deal. If you think that Islam is not a threat to your way of life, don’t miss this.” 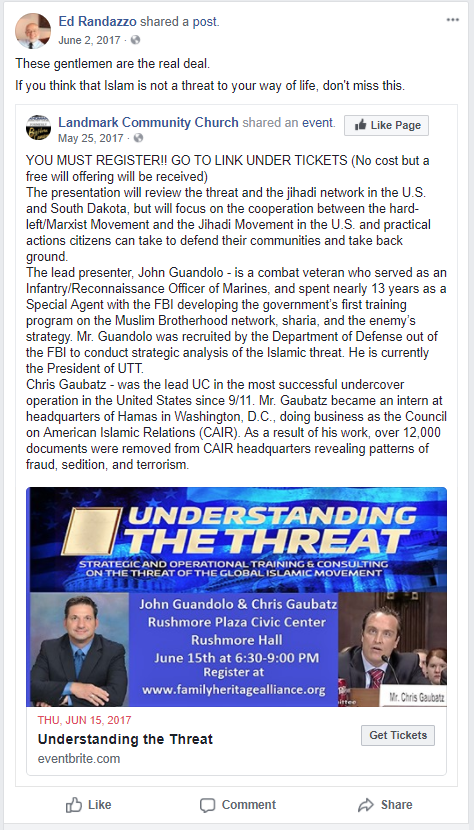 Working with others to spread anti-Muslim hate

FHA works with other organizations to attack Muslims, the most prominent being the local chapter of ACT for America, run by none other than Amy Willson.

Willson has been the key node connecting ACT and FHA. Far from downplaying their ties to Willson and ACT, in a 2015 blog post entitled, “Amy Willson Receives National Honor,” FHA proudly advertised that Willson won ACT’s “Citizen Legislator of the Year” award for working to pass a state-level anti-Female Genital Mutilation bill. The post went on to say:

As a postscript, upon reading this article, Amy asked that I also include that she feels very blessed to be working at Family Heritage Alliance and that she would have had a shot at getting the FGM bill passed if it were not for the help and support of the FHA and the FHA staff.

There are other examples of FHA’s partnership with groups, including the local ACT chapter. Hatewatch identified at least six anti-Muslim hate events in 2017 that FHA had sponsored, co-sponsored or openly promoted:

·       February 16-17: FHA, along with ACT for America and several other organizations, co-sponsored a pair of events with the Family Research Council, featuring Lt. General Jerry Boykin and Randy Wilson. 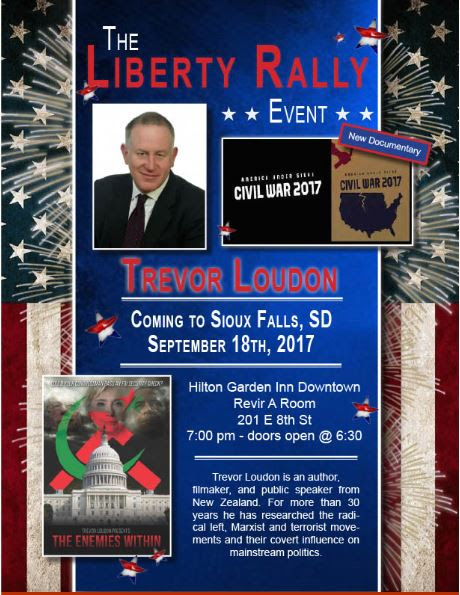 In 2018, Randazzo used his social media page to give his full-throated support for Anni Cyrus’ recent event. However he publicly deniedthat FHA was a sponsor of the event.

Working anti-Muslim hate into the mainstream

Hatewatch analyzed all of FHA’s annual scorecards produced since 2015 by its lobbying arm, FHA Action, identifying at least three examples where the organization has expressed its explicit support for anti-Muslim bills and resolutions in the South Dakota state legislature.

FHA Action’s 2015 legislative scorecard included support for HB 1089, an anti-FGM bill. As noted earlier, local ACT chapter activist and former FHA staffer Amy Willson won a national award from ACT for her role in passing the bill. HB 1089’s passage was celebrated by Willson in a postshe authored on the FHA Action website.

LD 745 was opposed by the Maine chapter of the American Civil Liberties Union for being “redundant” and “nothing more than an attempt to single out behavior that is commonly attributed to certain religious and ethnic communities as different from other forms of abuse.” (Earlier this year a pair of Hatewatchinvestigations found Rep. Sirocki was working closely with the Maine chapter of ACT for America to pass a 2018 version of her anti-FGM bill.)

The 2016 legislative scorecard included advocating for the passage of HB 1225, a bill that allowed for the forfeiture and disposition of property used in material support for acts of terrorism, lifting wording from “Andy’s Law” bills being sponsored in other state legislatures around the country. Originally developed by the hate group American Public Policy Alliance (APPA), which is also houses “anti-Sharia” bill model language on its website, experts have noted the APPA’s template legislation is both redundant and whose only real effect is perpetuating fears about Muslims.

Earlier this year it was reported Sen. Tapio said in unguarded remarks that a terrorist attack would boost his campaign for South Dakota’s soon-to-be vacated congressional seat.

FHA has also met with officials such as South Dakota Secretary of State Shantel Krebs and Attorney General Marty Jackley.

According to its website, FHA met with Krebs as early as September 27, 2016, when it awarded her their William Wilberforce Elected Official Leadership Award. FHA and Krebs publicly crossed paths again when she and Marty Jackley attended the April 29 William Federer event. Krebs and Jackley did not directly respond to media requests for comment about their attendance. Jackley’s office eventually responded to the UK news outlet, The Independent by downplaying his attendance, saying, “He was there for less than 15 [minutes]…before he went to a different engagement.”

In March 2018, Krebs met with a group of people that included FHA’s Ed Randazzo and ACT’s Amy Willson — whom she collectively described as “faith leaders.” The meeting came only months after she received an endorsement from prominent anti-immigrant movement figure Kris Kobach and declared her explicit support for President Trump’s “Muslim registry.”

Five months into 2018, FHA continues to seek political influence and policy change. Ed Randazzo is running for office, currently involved in a three-way primary battle for District 32 in the South Dakota House of Representatives.  More recently, FHA has sought to extend its presence into local politics, endorsing candidate Paul TenHaken for mayor of Sioux Falls.

FHA’s increased involvement in politics and hate, often masked in the name of faith, hasn’t fooled people and is receiving pushback. A local activist named Stacey Burnette, perhaps put it best in a recent letter to the editor in the Argus Leader, “While this group [FHA] claims to represent Christian values, its only devotion has been to support hate and discrimination against the LGBT, Muslims and people of color in South Dakota.”